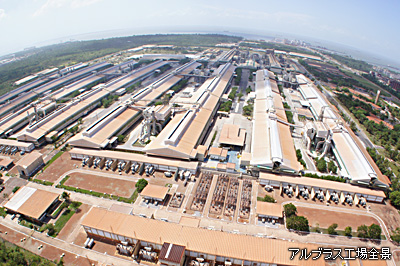 ALBRAS is an aluminum smelting plant, whose construction work was started in 1981. It was built in two phases with overall investment of US$1.4 billion. The first phase was completed in 1986 and the second phase in 1991, respectively. Presently, ALBRAS operates four pot lines with 960 electrolytic cells at production capacity of 450,000 tons a year. In July, 2015, ALBRAS commemorated the 30th anniversary of the start-up of the operation. Primary aluminium ingots produced by ALBRAS are exported to Japan and other countries, and supplied also to Brazilian domestic market. NAAC has the right to take annually 220,000 tons of primary aluminium ingots produced by ALBRAS, which is equivalent to approximately 10% of Japanese total import of primary aluminium ingots.

ALBRAS has been focusing its efforts on the Quality Control, Human Resource Development, Environmental Conservation, Social Contribution among others. As a result, ALBRAS has been highly recognized for its excellent operating and managerial performances, resulting in winning PNQ (Prêmio Nacional da Qualidade) Award comparable to the Deming Prize in Japan, and ANEFAC (Associação Nacional dos Executivos de Finanças, Administração e Contabilidade) Award for its distinguished quality of financial statements and transparency. Moreover, ALBRAS has been selected repeatedly as an excellent company by Brazilian leading economic magazines in their evaluation survey of “Biggest and Best Companies in Brazil”, “The 100 Best Companies to Work For”, “1,000 Major Companies” and “The Best Companies in the Personnel Management”, among others.

Top of this page